Male Breast Reduction Surgery – Will You Get Gynecomastia Again After Surgery? 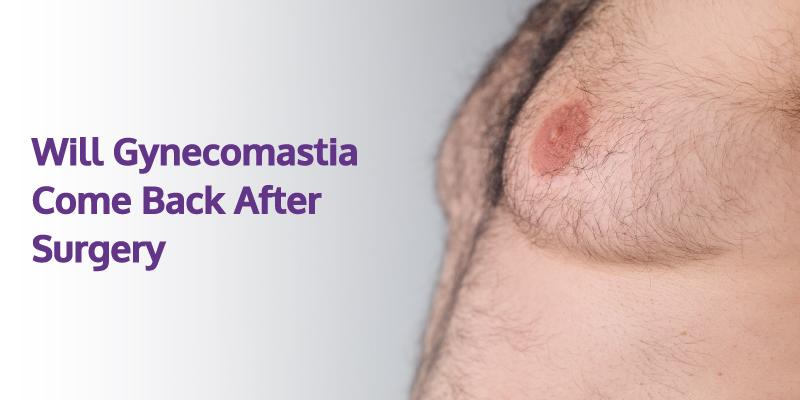 The fear of getting gynecomastia again after the surgery is a constant concern among men who consider having their breasts removed. Naturally, you want to know if the effects of the procedure will last. The good news is that with gynecomastia surgery, most individuals may permanently get rid of their gynecomastia. However, various other factors may cause male breasts to come back after gynecomastia surgery. We will look at these factors in more detail below so that you can get permanent outcomes from male breast reduction surgery.

Alt-text: Will Male Breasts Come Back After Gynecomastia Surgery

Can Gynecomastia Come Back After Surgery?

In a nutshell, gynecomastia signs and symptoms can reappear following male breast reduction surgery. However, gynecomastia recurrence is rather infrequent. Keep in mind that the success of your gynecomastia surgery will be mainly determined by how you handle your recovery and lifestyle after surgery. While gynecomastia treatment can eliminate male breasts for good, this cannot stop fat from accumulating in the chest and surrounding areas. You should be advised that future weight gain could lead to fat retention around your chest where gynecomastia once existed. Fortunately, because this is simply fat-related weight gain, it can be readily reversed with diet and exercise.

Reasons That May Cause Male Breasts to Come Back

When the glandular tissue is not entirely removed, that is the most likely cause of recurrence. This could be due to an inexperienced surgeon doing the treatment or the patient being treated for a disease known as pseudo gynecomastia. This is also the cause of male breast pain after surgery. Furthermore, suppose the underlying cause of gynecomastia was a medical problem such as an adrenal or pituitary tumor that was left undetected or untreated after male breast reduction surgery. In that case, the patient’s male breasts may reappear.

Weight gain after male breast reduction surgery is another factor that can lead to the recurrence of male chest fat. Although fat cells that have been eliminated will not grow back, significant weight gain may cause new fat cells to grow in treated and untreated areas. Recurrence of male breasts can also be caused by other circumstances, such as a hormonal imbalance or certain drugs.

What is the Solution If Gynecomastia Comes Back?

Re-surgery is the best option in such a case of recurrence. The most important thing is to wait six months before having a second surgery and keep your weight similar to before the first. Even at the same weight, surgery can be scheduled if the before and after photos and measurements show that gynecomastia has returned. To rule out any internal condition that caused the recurrence, all diagnostics, including male and female hormone tests, should be performed.

Is Gynecomastia Really Worth It?

Statistics show that up to 70% of men will be affected by gynecomastia to various degrees. The psychological impact can be significant, causing depression, anxiety, eating disorders, and lowered self-esteem. Many patients with different gynecomastia stages are delighted with their post-surgical results and have continued so for years. When a skilled, board-certified plastic surgeon operates, gynecomastia is unlikely to return.