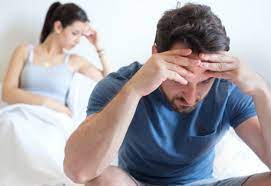 Erectile dysfunction in men is not as rare as you might imagine. An erection depends on general health, everything from blood flow, the function of the strength of the heart muscle, the level of hormones in the body, and the optimal functioning of the nerves to the overall functioning of the brain. Disorders can occur mainly due to the physical component, but of course, there may also be a psychological reason behind it.

According to the American Urological Organization, 1 in 10 men experience erectile dysfunction at some point in their lives, and the chances of it increase with age (about 10 percent per decade). The medical definition of erectile dysfunction is “a constant or temporary inability to achieve and maintain a healthy erection sufficient for sexual pleasure.”

Occasional erection problems are not necessarily a concern. Sometimes they are the result of excessive alcohol consumption, stress, fatigue, or a simple quarrel with a partner. However, if the problems occur frequently, there is an essential underlying physiological or psychological problem that needs to be treated. Some of the reasons that cause erectile dysfunction can also be dangerous.

Let’s take a look at some of the most common reasons for erection problems.

Alcohol and some reaction drugs initially increase sexual desire, but over time the effect sounds with greater use. If you have erection problems in a drunken state, and the problems disappear in a few days, so to speak, there is no reason to worry. Opiates work differently on people, but we can say that they cause erectile dysfunction.

It should be noted here that ‘one failure’ can also lead to this undermining of a man’s self-esteem, which can cause erectile dysfunction to recur only out of fear.

The fear of not being able to get an erection can eventually lead to this starting to happen more often. Any kind of fear or anxiety triggers the release of adrenaline and directs it into the bloodstream instead of the genitals, resulting in an erection not occurring.

Disorders, for this reason, most often occur due to fear of premature ejaculation, fear of a relationship with a new partner, or fear of unsuccessful attempts to conceive a child. The partner’s support is crucially important.

We often like to say in conversation that men think with their heads down, but women don’t. But this is not the case. If you are unable to connect emotionally with your partner, if you do not receive adequate support, confirmation, and even affection in the relationship, erectile dysfunction can also occur. Of course, we are different, both men and women, as well as each other – some need less emotional support, others more.

Stress and fatigue are the two most common causes of erectile dysfunction that many men neglect. Chronic stress releases adrenaline; poor sleep reduces the production of the male sex hormone testosterone, and according to the International Association of Sexual Medicine, nearly 70 percent of men with sleep apnea also have erectile dysfunction. For men for whom sleep and stress reduction are not on the list of priorities, knowing that both can improve sexual performance is a good motive for changing life habits.

The cause of erectile dysfunction, which men will often overlook, is the medications they take. There are several types of medications in which erectile dysfunction is mentioned as a side effect. These include diuretics, medications for high blood pressure, antihistamines, antidepressants, antiarrhythmics, and even aspirin. If you notice that erection problems have occurred while taking certain medications, and consequently believe that they are responsible for the situation, consult your doctor.

Apathy, frustration, low self-esteem – all of these can affect your sex life. Keep in mind that even the usual antidepressants can worsen erection problems, but with these drugs, the health side should not be neglected. Talk to your doctor about taking these and combine different aspects that will suit you.

If you’ve addressed any of the above-mentioned factors and are still experiencing ED, erectile dysfunction medication is the way to go.

We all have heard of popular Viagra, but since Viagra’s discovery in the late 90s, there have been many new erectile dysfunction treatments on the market, that can help you get a strong enough erection to have sex.

You can buy Kamagra online from any trusted online pharmacy and have it discreetly packed and delivered to your doorsteps. The price of Kamagra is half less than the price of Viagra. The best part is, that you can buy Kamagra for Bitcoin, and you don’t have to link your credit card to such a purchase.

Finally, it should be noted that external sexual stimulation is always required for Kamagra to work effectively.

Is There a Better Option than Outpatient Alcohol Rehab Austin Center for Addiction Treatment?

What You Need To Know About Personalized Medicines